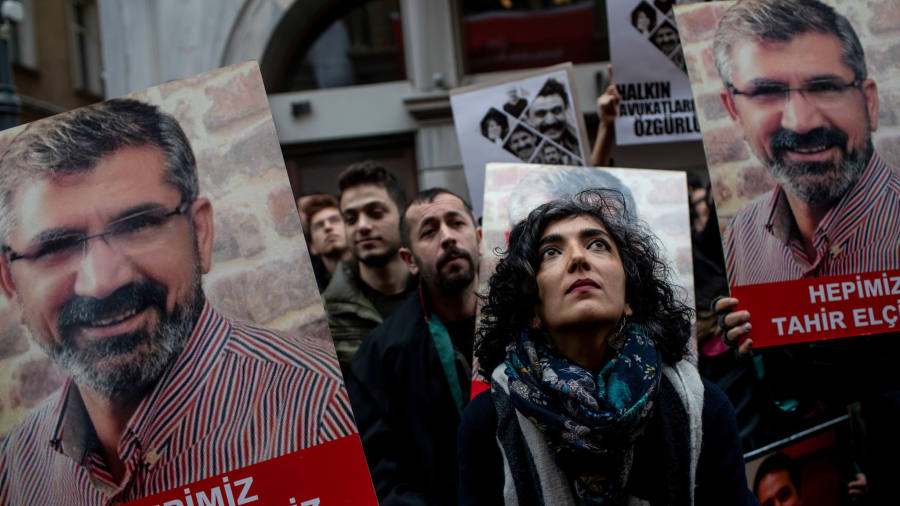 For decades, Turkish society has been scarred by unsolved murders. Shadowy killings, many never fully probed, have fuelled theories about the role of criminals, politicians and the security services in the demise of state opponents, activists and journalists.

The case of Tahir Elci, a Kurdish human rights lawyers shot dead in Diyarbakir in the east of the country three years ago, also appeared destined to remain unresolved.

But his friends and family took a step closer to justice on Friday as a London-based team of investigators said that he was killed by one of two policemen during a chaotic firefight that erupted around him as he called for peace in a city sinking into conflict.

Campaigners say the two officers, who gave witness statements but were never interviewed as suspects, must now be held to account.

“We hope this report will create public pressure on the prosecutor to finish the investigation and ensure Tahir Elci’s death does not remain among the files of unsolved murders,” said Gamze Yalcin, a member of the Diyarbakir Bar Association commission working on the case.

The Turkish government did not respond to a request for comment on the report’s findings.

Turkey has a long history of unresolved murders and disappearances, from the mysterious 1948 killing of the author Sabahattin Ali on the Turkish-Bulgarian border to the murder in 2007 of Hrant Dink, an Armenian journalist whose teenage assailant was jailed. The trial of state officials accused of complicity drags on to this day.

The darkest chapter unfolded in the 1990s, at the peak of the conflict between the military and the armed Kurdistan Workers’ party (PKK), when PKK fighters as well as militias backed by the state carried out scores of extrajudicial killings. The Turkish Human Rights Foundation has said that 1,735 deaths from that decade remain unexplained.

“Political murders remain unsolved because of a policy of impunity,” said Raci Bilici, a board member of Turkey’s Human Rights Association, which advocates for bereaved families seeking justice. “Families cannot grieve and the wounds never heal. If we are unable to reconcile with the past, we will never have peace.”

Political murders remain unsolved because of a policy of impunity

The fight for answers was left to rights defenders such as Mr Elci, a softly spoken father of two who was head of the Diyarbakir Bar Association.

On 28 November 2015, Mr Elci was making a public statement at the foot of a famous four-legged minaret in Diyarbakir, his adopted home city and the cultural capital of the country’s Kurdish-dominated east. The monument had been damaged in clashes that gripped Diyarbakir after the ceasefire with the PKK collapsed. Mr Elci, a life-long campaigner for peace, was calling for an end to the escalating violence when he was killed by a single bullet to the back of the head.

His death shocked the nation. The government suggested Mr Elci was targeted by the PKK. The opposition said it was a planned execution, and that he was targeted after being accused of supporting the PKK, a designated terrorist organisation. The then prime minister Ahmet Davutoglu vowed to find the perpetrators.

But critics say the investigation has been patchy and key evidence, such as surveillance camera footage, is missing. No suspects have been named.

Frustrated at the lack of progress, in 2016 the Diyarbakir Bar Association approached Forensic Architecture for help. The collective of architects, filmmakers, journalists, lawyers and scientists, based at Goldsmiths, University of London, has a record of unearthing new facts in cases ranging from chemical weapon attacks in Syria to the Grenfell Tower fire in the UK capital. The group combed through video, witness testimonies, forensic reports and architectural maps to reconstruct the last moments of Mr Elci’s life.

In a 25-minute video, researchers show how, shortly before Mr Elci was hit, two members of the PKK’s youth wing shot and killed two policemen in the heart of Diyarbakir’s old walled city. They fled, fatefully, past Mr Elci, and shot at police monitoring the press event who returned fire. The youths escaped unharmed but Mr Elci was struck.

By analysing the sounds and trajectories of 40 gunshots, Forensic Architecture was able to rule out the chance that the PKK youths killed Mr Elci and the possibility of a long-range weapon. Their report concludes that only two of the five policemen at the scene could have fired the fatal shot. It also criticises police for failing to administer first aid to the lawyer as he lay bleeding and for the ineffective investigation that followed.

An official at the Diyarbakir prosecutor’s office, who was not authorised to give his name, said the report “does not contain any finding that can be regarded as evidence” but added that it would be assessed in the continuing investigation.

Eyal Weizman, founder and director of Forensic Architecture, said it was beyond the group’s remit to determine whether Mr Elci was deliberately targeted or killed in error during the mayhem. He called on Turkey to launch a credible investigation to answer that question.

“The best remedy against further escalation is understanding the truth,” he said. “Now the ball is with the Turkish authorities. We hope they will pick it up.”