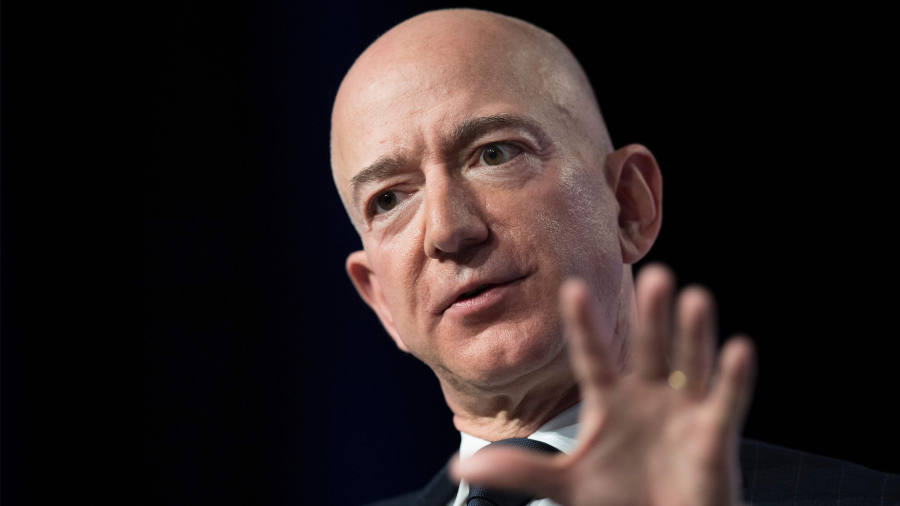 Jeff Bezos has accused the National Enquirer and its parent company, American Media Inc, of “extortion and blackmail” in its reporting about his personal life.

The Amazon founder and chief executive wrote in an extraordinary personal post, on the Medium website, that the tabloid had threatened to publish intimate photos and text messages between him and Lauren Sanchez, the woman he has been dating, unless he called off an investigation into how it obtained the messages and put out a statement denying AMI’s coverage was “influenced by political forces”.

The post marked a sharp escalation of tensions between the world’s richest person and the US’s biggest tabloid publisher, which has close connections to President Donald Trump, a frequent and scathing critic of Mr Bezos.

After Mr Bezos announced last month that he was divorcing his wife of 25 years, MacKenzie Bezos, the National Enquirer published a series of stories revealing his relationship with Ms Sanchez, a former television presenter, including text messages between the couple.

The tabloid claimed that the usually private Mr Bezos had only made his divorce public after learning it was preparing to publish its story, which it said was the product of months of tracking the billionaire and Ms Sanchez. Mr Bezos hired investigators to look into how the Enquirer had obtained the texts.

AMI’s history with Mr Trump raised suspicions that its motives in going after Mr Bezos were shaded by politics. David Pecker, AMI’s chief executive, is a longtime friend of the president, whom he met decades ago through mutual friends in Florida, where both men have homes.

As well as publishing flattering stories about Mr Trump during his presidential campaign, Mr Pecker offered to find, buy and suppress negative stories, an arrangement known as “catch and kill”.

In December, AMI reached an agreement with the US justice department enabling it to avoid prosecution for paying off a woman to prevent her from making “damaging allegations” about Mr Trump before the 2016 election.

Mr Bezos has been a popular target for Mr Trump. The president has attacked Mr Bezos over his ownership of the Washington Post, whose coverage Mr Trump has disputed. He has also blamed Amazon for the US Postal Service’s budget woes.

Speculation that the Enquirer’s reasons for digging into Mr Bezos’s personal life were connected to the president’s animosity towards the Amazon chief executive gained traction in recent days from an unexpected source: the billionaire’s own security consultant, Gavin de Becker.

Mr de Becker, who has been leading the investigation into how the Enquirer got the executive’s texts, told the Washington Post and other news organisations that Mr Bezos had not been hacked, but that the leak had been a “politically motivated” attack meant to embarrass the Amazon boss.

In his post, Mr Bezos included what he said were emails from Dylan Howard, AMI’s chief content officer, and Jon Fine, AMI’s deputy general counsel. The emails were timestamped a few hours before the Washington Post published a story about the possible political dimensions in the Enquirer’s coverage, including the interview with Mr de Becker.

“Nothing I might write here could tell the National Enquirer story as eloquently as their own words below,” Mr Bezos wrote.

The message from Mr Howard described the photos the tabloid had obtained. Mr Fine’s message was a list of “proposed terms” between AMI, Mr Bezos and Mr de Becker to reach “a full and complete mutual release of all claims”.

It included a provision that Mr Bezos and Mr de Becker would issue “a public, mutually-agreed upon acknowledgment from the Bezos Parties, released through a mutually-agreeable news outlet, affirming that they have no knowledge or basis for suggesting that AMI’s coverage was politically motivated or influenced by political forces, and an agreement that they will cease referring to such a possibility”.

Mr Bezos said he was making the correspondence public to defy AMI’s tactics.

“Any personal embarrassment AMI could cause me takes a back seat because there’s a much more important matter involved here. If in my position I can’t stand up to this kind of extortion, how many people can?” he wrote.

“Of course I don’t want personal photos published, but I also won’t participate in their well-known practice of blackmail, political favours, political attacks, and corruption. I prefer to stand up, roll this log over, and see what crawls out.”

An Amazon spokesman confirmed Mr Bezos had written the post. Mr Howard, Mr Fine, and a representative for AMI did not respond to requests for comment.